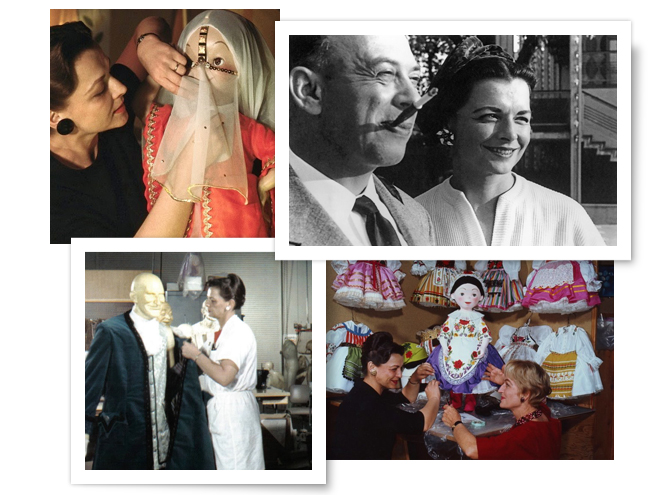 2.  A Start At Disney  Following the launch of a career designing ladies apparel, Alice Davis became recognized for her expertise as a pattern maker and for her use of fabrics. Alice’s start at Disney began with a call from animator Marc Davis – her future husband and former art instructor at Chouinard.  Requiring a costume for live-action reference of Briar Rose for animation on Sleeping Beauty, Marc thought of Alice.  She recalled “Marc wanted to see how the skirt worked in live dance steps, and that was my first job at Disney.”

3.  Widely Recognized For  Her incredible creative contribution to the It’s a Small World attraction for the 1964-65 New York World’s Fair.  In collaboration with Disney Legend Mary Blair, Alice Davis researched, designed and supervised the creation of more than 150 detailed costumes for the Audio-Animatronic dolls of this beloved classic.  At the time Alice also formulated costuming procedures for Disney, set up a manufacturing base and developed quality control refurbishing techniques that established the standards for three dimensional characters created by Walt Disney Imagineering.

4.  Disney Legacy  Alice Davis translated pirate attire from her husband Marc Davis’ original drawings into dazzling costumes for the Audio-Animatronic figures of Pirates of the Caribbean.  She designed more than 150 costumes for the dancing dolls of It’s a Small World, costumed the Audio-Animatronics of the Carousel of Progress and of the Disneyland attraction Flight to the Moon.

5.  Becoming A Disney Legend  Alice Davis was inducted as a Disney Legend in 2004. She was also awarded the distinct honour of a window on Disneyland’s Main Street, U.S.A on May 10, 2012.